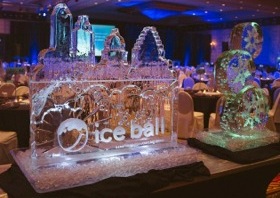 If my first event of the fall gala season is any indication of the months to come, hold on to your bidder numbers Austin. On August 25, 600 guests arrived at the Hilton Austin downtown for some serious FUN and serious giving at the 8th Annual Ice Ball benefiting Big Brothers, Big Sisters of Central Texas (BBBS). The sold out fundraising gala is a signature event of BBBS and is very Austin-flavored. This year the Ice Ball featured the high-energy music of Radiostar and gourmet samplings from 10 of Austin’s hottest restaurants.

Drum roll please. This year the Ice Ball live auction raised a record-breaking $196,000, which is a 553% increase in revenue in only 2 years that we have been working together. It was a pretty successful night in Austin.

I can hardly begin to express my thanks and appreciation for all you did to make this event a HUGE success! You bring so much knowledge, charisma, and wow-factor to our event all yearlong, not to mention on stage where you absolutely shine!My board of directors (and more importantly my parents!) can’t stop raving about you. I know the numbers are hard to believe but they are REAL!! saidAlida Tallman, Vice President of Development, Big Brothers Big Sisters of Central Texas.

What were some of the fun ingredients that made for such a fabulous event? Follow me.

Hip and Hop
Never underestimate the energizing beat of hip-hop. I had the best time introducing the fourteen “Bigs”, the Big Brothers and Big Sisters of BBBS,as the official live auction bid spotters who entered the ballroom traveling down the catwalk groovin’ to Vanilla Ice’s “Ice, Ice Baby.”

Heads or Tails
A FUN spin on musical chairs was a game we played called Heads or Tails, with almost half of the attendees paying $20 for a chance to win a half ounce gold coin valued at $800. Participants had to guess if a coin was going to be “heads” or “tails” and by process of elimination, we end with one lucky winner.

Bidding Frenzy!
Eight fabulous live auction items brought in dollars that were 142% of the value. This Austin crowd was definitely here to bid on the exotic trips to Bali, Costa Rica, Cabo San Lucas, and Big Sky Country Montana, while supporting 40 years of Big Brothers Big Sisters of Central Texas.

Moving Moment
The most moving moment came about half way through the live auction with our Fund-a Friendship portion of the evening. It included a two-minute video about our guest speaker Zenobia Dorman, a former Little Sister of BBBS, who shared a heartfelt reflection on the impact of her Big Sister on her life. She was greeted with a standing ovation from everyone in the room as she took the stage. There seated nearby the stage while Zenobia spoke was her Big Sister Amy. It was hard not to get teary eyed as Zenobia said a personal thank you to her Big Sister for always being there for her. The moment was so moving that one generous donor gave an anonymous gift of $10,000 to BBBS.

If the goal was to raise awareness and support of Big Brothers Big Sisters’ mission and vision, the Littles, the Bigs, Vanilla Ice, Zenobia and Amy and their 600 guests surpassed their goal.

Next year, I hope you can join me at the coolest place in Austin at the Ice Ball on August 24, 2013.