Austin Monthly Character of the Month 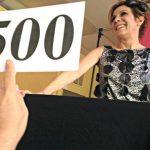 Many thanks to Sarah Thurmond, Senior Editor with Austin Monthly for allowing us to share their December 2013 Character of the Month article written by Rachel Thompson with photography by Drew Anthony Smith. Consider subscribing to The Austin Monthly to be in on all of Austin’s movers and shakers.

Gayle Stallings Hollers for Dollars
Gayle Stallings does two things that most people are loathe to do: get up on stage and ask for money.
By Rachel Thompson

Reprinted with permission from Austin Monthly.

As the owner of FUNauctions, the auctioneer handles 30 to 35 benefits for local nonprofits each year. Using her background in theater, radio and public speaking to make it more of a show than an auction, she gets bidders in the giving mood by recruiting everyone from circus performers to celebrities, preparing elaborate entrance routines and sporting colorful costumes on her tiny 4-foot-11 frame. “On stage,” she says, “people think I’m 10 feet tall.”

I’m serious about having fun. The more fun we can infuse, the more money will follow. I always like it when people say, “You made my husband give more money than he’s ever wanted to give, and he’s happy about it.”

How do you handle tense bidding wars?

I try to egg on the bidders. “I know you really want that item, and that little old lady is out-bidding you right now.” When it gets intense like that, I just diffuse it with laughter.

What’s the craziest thing you’ve done during an auction?

I learned how to do a balance-and-juggling act with only two practices. One of the circus performers gets on his back, puts his legs up and goes, “Now jump on my feet. Trust me.” I’m like, What was I thinking?

I heard you had a celebrity run-in at a benefit for the Thinkery.

Jared Padalecki from Supernatural has a home in Austin, and he put together a package for a day on the set in Vancouver. If the bidding got high enough, you’d get a walk-on role. After having a monkey on my head [during the auction], I introduced myself and he says, “You are one badass lady on that stage.” I said, “You wait till I sell your item.” We sold it for $29,000.

For more FUNauctions in the news visit our Press page.