Kudos and thanks to Eric and Brittany Highland with The Austinot for allowing us to share this FUN blog detailing all the FUN at the March 24th Bandana Ball presented by Ronald McDonald House Charities of Austin and Central Texas. Our cup runneth over. We recommend subscribing to The Austinot to be in the know about all good things Austin.

Bandana Ball Gives Hope to Children & Their Families in Central Texas
Reprinted with permission from The Austinot. 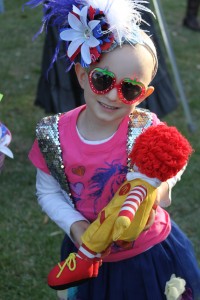 Twirling and dancing on the lush green grass of Wild Onion Ranch, a little girl was wearing heart shaped sunglasses and sporting a smile that could melt a heart of stone. Though she was surrounded by a thousand other people, including philanthropists, press members, and even celebrities, she was clearly the star of the show.

Two years ago, five and a half year old Brooke Hester was diagnosed with Stage IV High Risk Neuroblastoma, a cancer that is common among infants and children, and difficult to treat. Upon learning the news, Brooke’s parents Beau and Jessica committed to do whatever was necessary, traveling wherever they needed to in order to find a cure.

On March 23, 2013, the Hester Family traveled to the Wild Onion Ranch in Austin for the 2013 Bandana Ball. Though Brooke had recently undergone a chemotherapy treatment, the Hesters wanted to do their part to help families like theirs.

Like countless other families, the Hester family has found unconditional love and support from the Ronald McDonald House Charities of Austin and Central Texas.

Each year, to raise money to help families in need, the Ronald McDonald House in Austin throws the Bandana Ball, a lavish party with live music, auctions, games, food and entertainment. Kent Burress, CEO of the Ronald McDonald House Charities of Austin and Central Texas, stated, “The local support from Bandana Ball makes it possible for families to remain close to their children and that, right there, is our goal.”

For 2013, the lead sponsors for the Bandana Ball were the Austin Area Chevy Dealers and the McDonalds Owners and Operators. They worked in cooperation with Wild Onion Ranch, The Spazmatics, 2Dine4 Catering and professional auctioneer Gayle Stallings to present a memorable evening with a lasting impact.

It’s difficult to describe how magical the night was. Entering through a wrought iron archway with a chandelier, the venue opened to impeccably kept grounds filled with beautiful flowers, large trees and stone pathways. Live music played on the front lawn as guests arrived.

As guests waited in line to check in, they were met by smiling servers who carried scrumptious hors d’oeuvres and drinks. Once at the check-in tent, an auction number and table number were provided by a courteous volunteer.

There was no shortage of things to do while guests explored the grounds. Various seating areas for conversation were surrounded by flowers, with stunning views in every direction.

The carriage house was converted into a silent auction room filled with high quality items and service packages up for auction. Included were tech products like a Dell computer and Apple iPad Mini, sports memorabilia items like a Texas Longhorns football signed by Mack Brown, and so much more. From spas to vacations and everything in between, there was something there for everyone.

By the pool and fountain was another open bar area where more servers took care of each guest. Just below that on another landscaped tier was a wine toss sponsored by Nordstrom. Picture a ring toss at the fair, only with bottles of wine as the prizes! Adjacent to that was a photo booth for fun and silly pictures, also quite a hit with the crowd.

Dusk settled and strings of lights came on around the ranch, intensifying the ambiance. As the dinner buffet opened, the crowd of a thousand people slowly transitioned to a massive tent. The tent held a stage, tables covered in white linen and burlap, and red bandanas tied to the back of every chair. BBQ, salads, drinks, desserts, and many other treats were available to guests. The service was stellar and no one was left wanting.

As the meal came to a close, the live auction started. The spunkiest spitfire of an auctioneer I’ve ever seen, Gayle Stallings, took the stage and jump-started the bidding. Items and experiences auctioned included a guitar signed by all four members of Led Zeppelin, a trip to Las Vegas, and a training session with Chicago Bears offensive tackle J’Marcus Webb.

But in between the decadent dinner and glamorous auction items, the purpose of the gathering was never lost. When the spotlight was placed on the event’s purpose to support families with sick and hospitalized children the guests outdid and outbid every previous Bandana Ball giving record.

This was my 24th Bandana Ball. Yes, I was at the first ball and our goal was the same: to raise money. [24 years ago], that goal was $40,000. I don’t think in our wildest dreams we would have ever dreamed how this has grown. I am so proud to be a part of this spirit. Denny Meyer, long-time Ronald McDonald House supporter

By far the most special moment of the entire event was the portion of the evening called Sponsor a Family. The stories of specific Ronald McDonald House families were featured and philanthropy was at its height. Though guests received nothing in return but the satisfaction of knowing they were helping the great mission of the Ronald McDonald House Charities of Austin, their generosity abounded.

Hundreds of people raised their bid cards from the $10,000 range down to $100. More than $149,000 was raised during this portion of the night alone. Little Brooke Hester sat quietly as the cards went up. But when her family was featured, her father Beau picked Brooke up as she received a standing ovation. Because everyone was standing, you couldn’t see her any longer. Not to worry, though. 6’7″ offensive tackle J’Marcus Webb came alongside and helped to lift Brooke even higher.

By the end of the night, one thousand guests had contributed over $550,000 in support of the Ronald McDonald House Charities of Austin and Central Texas.

Bandana Ball: Ways to Get Involved

The night came to an entertaining close as the colorful and talented cover band The Spazmatics took the stage until just after 11 PM. Though the night was finally over, the effort to help families continues. Bandana Ball won’t happen again until next year, but if you have read this far and feel that supporting the Ronald McDonaldHhouse is something you can and would like to do, then read just a bit further.

The Ronald McDonald House is always looking for volunteers and donors to keep helping families like the Hesters in their time of need.

At the Austinot, we love the Ronald McDonald House Charities of Austin and are fully supportive of their efforts in Central Texas. We hope you’ll join us in this effort. Please share this article via Facebook and Twitter, and maybe even on Pinterest or Google+. But let’s help get the word out that this is a cause worth promoting.

Learn more about the Ronald McDonald House Charities of Austin and Central Texas on their website here.