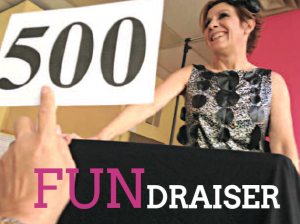 FUNauctions LLC is excited to share an article about benefit auctioneer Gayle Stallings appearing in this month’s issue of Auctioneer, published by the National Auctioneers Association (NAA). Our thanks to NAA for being the leading resource for professional auctioneers in the U.S.,Canada and beyond.

This material first appeared in the February 2014 edition of Auctioneer, the official publication of the National Auctioneer Association, and was approved for reprint.

From Super Woman to circus performers, Gayle Stallings works to put the ‘fun’ into fundraising.

When Letitia Frye met her Certified Auctioneers Institute classmates, she pegged Gayle Stallings as the funny one.

“She handed out these temperature gauges that you put on your hands to tell what kind of mood you’re in, and she said that if it turns red, you’re in the fun zone. Then, she pointed out how the word ‘fun’ is in fundraising,” recalls Frye, CAI, BAS, of Letitia Frye Auctions in Scottsdale, Ariz. “I thought she was a hoot.”

After the two worked closely as co-chairs of their CAI class’ fun auction, Frye realized Stallings, CAI, BAS, of FUNauctions, in Austin, Texas, was much more than spunky.

“Yes, she’s this wild Auctioneer who dresses as Super Woman, will wear a hula outfit, and, at five-foot-nothing, gets picked up and carted around on stage. But, I quickly learned she is also a consummate professional. She is extremely hard-working, detail-oriented, positive and has the biggest heart,” Frye says.

Stallings officially entered the benefit auction business less than 10 years ago, however, she considers her auction roots deep.

“I’ve been an Auctioneer all my life — I just didn’t know it,” Stallings says.

Her comment refers to a background that prepared her for benefit auctioneering. She previously served as a nonprofit executive, worked as a public speaking coach and has experience in radio, television, theater and event planning.

“I packaged everything together and discovered what I truly love to do,” she says.

She decided to take the fun route in her auctions so that attendees wouldn’t be intimidated. This has meant firefighters and celebrities at auction, and Stallings is known to bring in circus performers and blend right in with them. The lively atmosphere, she says, has led to generous donations for organizations in need.

Beyond the fun, Stallings’ passion for clients shines. She doesn’t just show up for auctions; she considers herself a strategist for clients. This means she’s present prior to auctions for events including venue tours, where she often advises clients on issues such as sound and lighting.

“Someone once told me, ‘Gayle, you are like my therapist. You hold my hand,’” she says.

On stage at auction, she considers herself an ambassador as she raises funds. To accomplish this, she first finds out as much as possible about an organization.

“I really end up feeling personally connected to my clients’ missions, and then I get up on stage and tell their stories,” Stallings says. “Like I tell my clients, I raise money like it’s my own organization. I’m married to an executive director of a nonprofit, and I used to work at a nonprofit. We really do understand our clients’ work.”

Stallings entered the National Auctioneers Association’s three-year CAI program after multiple other Auctioneers spoke of how the program would take her business and leadership skills to the next level. She graduated from the program in 2010 and now likens the benefits of CAI to sports.

“I’m definitely on the petite side, so I never got to play a lot of sports,” says Stallings. “But with CAI, I feel like I’m on the first string with all these exemplary auction professionals.”

The depth of experience found among her classmates has proven invaluable.

“We end of upping each other’s game,” she says. The designation positions her to compete for the best jobs, she says, and the relationships she’s built through CAI will last a lifetime.

“If not for CAI, I never would have met Letitia,” Stallings says of Frye, “And she has become a best friend.”