The past year has been another whirlwind of nonprofit fundraising $3 million and a record number of media mentions — too much FUN not to share them with you.

We would like to acknowledge the following publications, reporters and photographers who further the mission of area nonprofit organizations through their reporting.

“Our friend, the energetic auctioneer, Gayle Stallings with Fun Auctions, led guests in the live auction and Fund-a-Friendship portion, which alone raised $250,000 in donations. She just has a way of keeping bidder paddles, up and up and up!” Thanks to William Jackson with InFluential Magazine and the September/October 2014 issue highlighting this year’s Ice Ball benefiting Big Brothers Big Sisters of Central Texas. 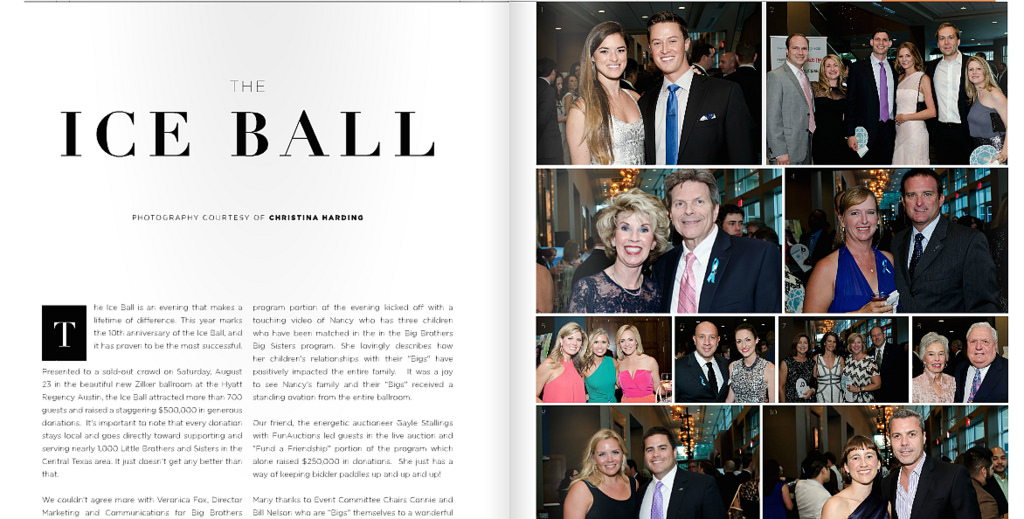 The September 25, 2014 issue of the West Austin News front cover photo of myself with Sarah and Dr. Ernest Butler at Imgaginarium 2014 benefiting The Thinkery. My thanks to Stacey Harrell for society coverage and photos of a fabulous event. 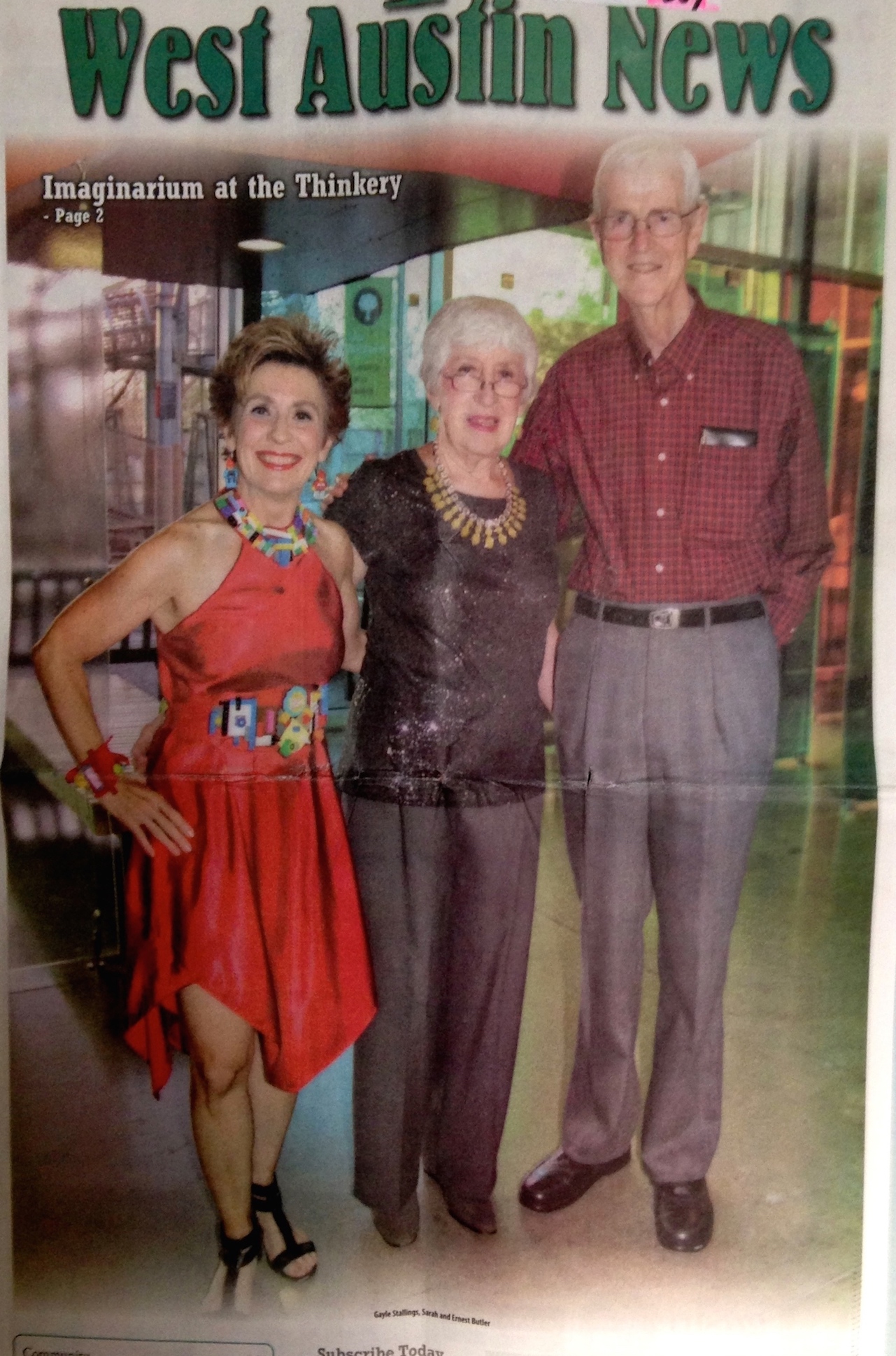 “Live auctioneer Gayle Stallings wore a red dress with a matching Lego necklace and belt.” By Holly Jackson for the Westlake Picayune September 2014.

The September 25th issue of the West Austin News with FUN coverage of Ballet Austin‘s Fête 2014 with photos by Forrest Preece and Casey Chapman-Ross Photography. 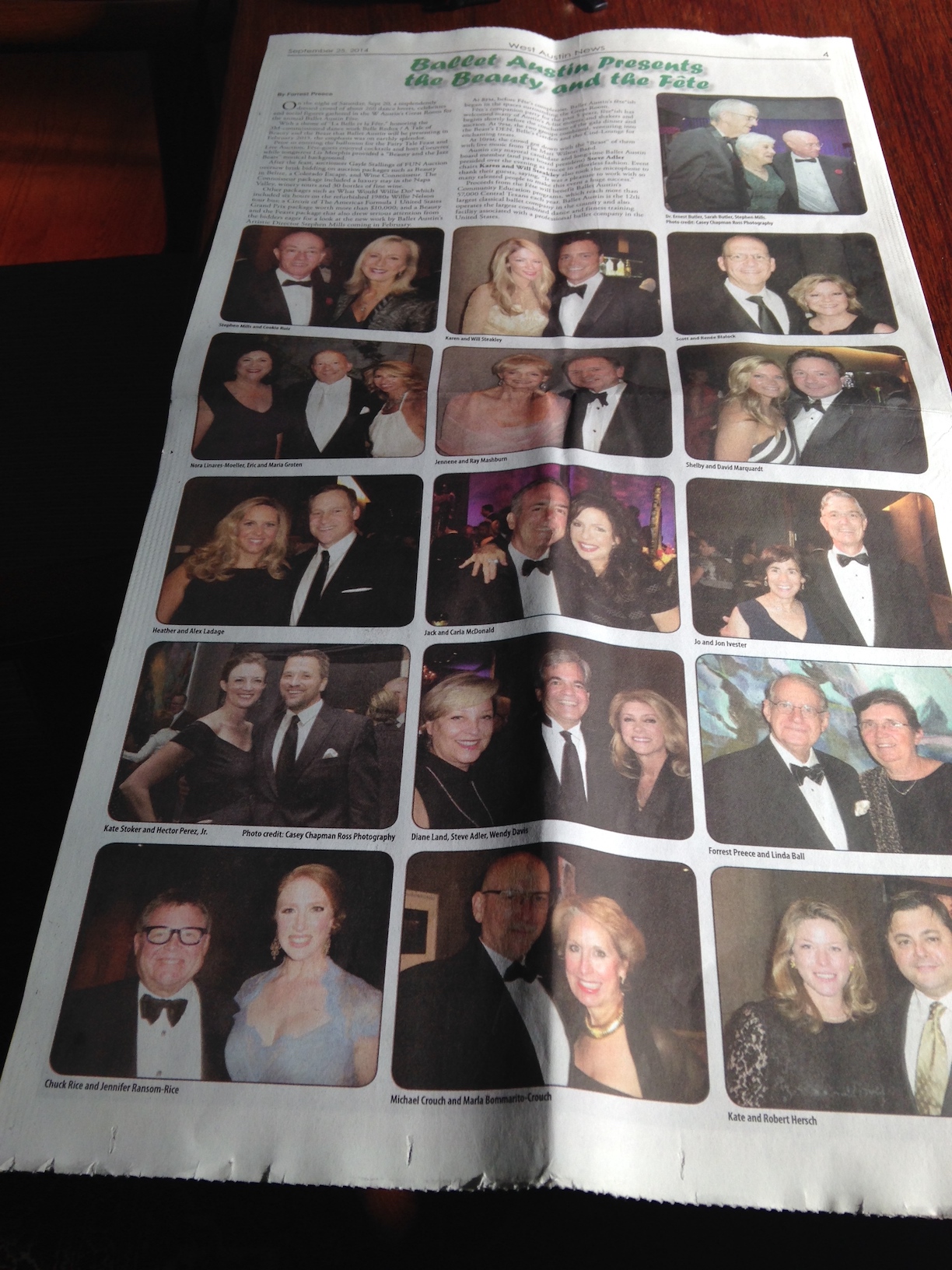 I was excited to be part of an article by Yenis Monterrey covering Ballet Austin‘s Fête 2014 for Splash Magazines – adding style to your life TM – Los Angeles. September 2014. 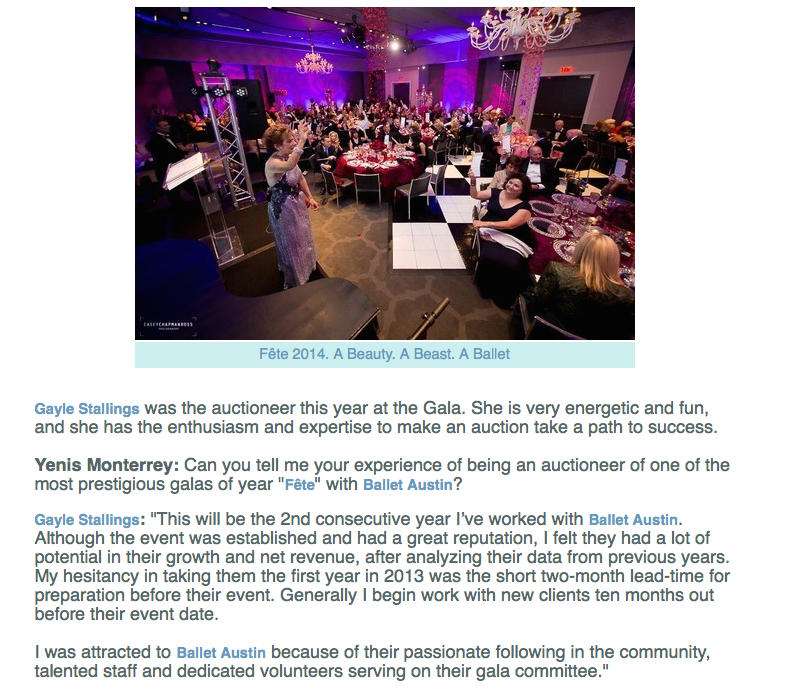 “Guests began the night with laughter and conversation, shed some tears during the program but responded with lots of bids during the auction led by Gayle Stallings.” By Robert Godwin for Keep Austin Giving. June 1, 2014. 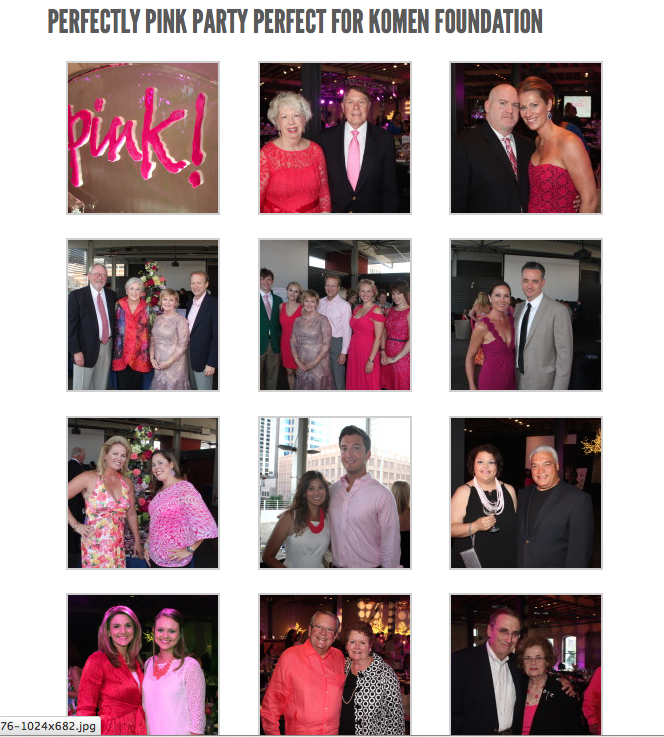 Art Bra Austin for the Breast Cancer Resource Centers of Texas. By Holly Jackson for the Westlake Picayune. June 2014.

“After the program, the live auction began with auctioneer Gayle Stallings of FUNauctions. As always, she brought the crowd to a bidding frenzy.” Rebekkah Adams, Ask Miss A, Charity Meets Style, June 2014.

“Again auctioneer Gayle Stallings led the spirited live auction. CASA volunteers proudly were introduced on stage and acted as bid spotters.” By Holly Jackson for the Westlake Picayune. May 21, 2014.

“True to form, auctioneer Gayle Stallings energized the crowd to lift their bid paddles high to raise $200,000.” Over 880 guests, decked out in their best western attire, arrived at the enchanting Wild Onion Ranch on March 22 and raised $530,000 at Ronald McDonald House Charities® of Central Texas’ 25th Annual Bandana Ball and Auction. All proceeds will support families with critically ill or injured children in Austin-area hospitals. By William Jackson, Influential Magazine. March 2014. 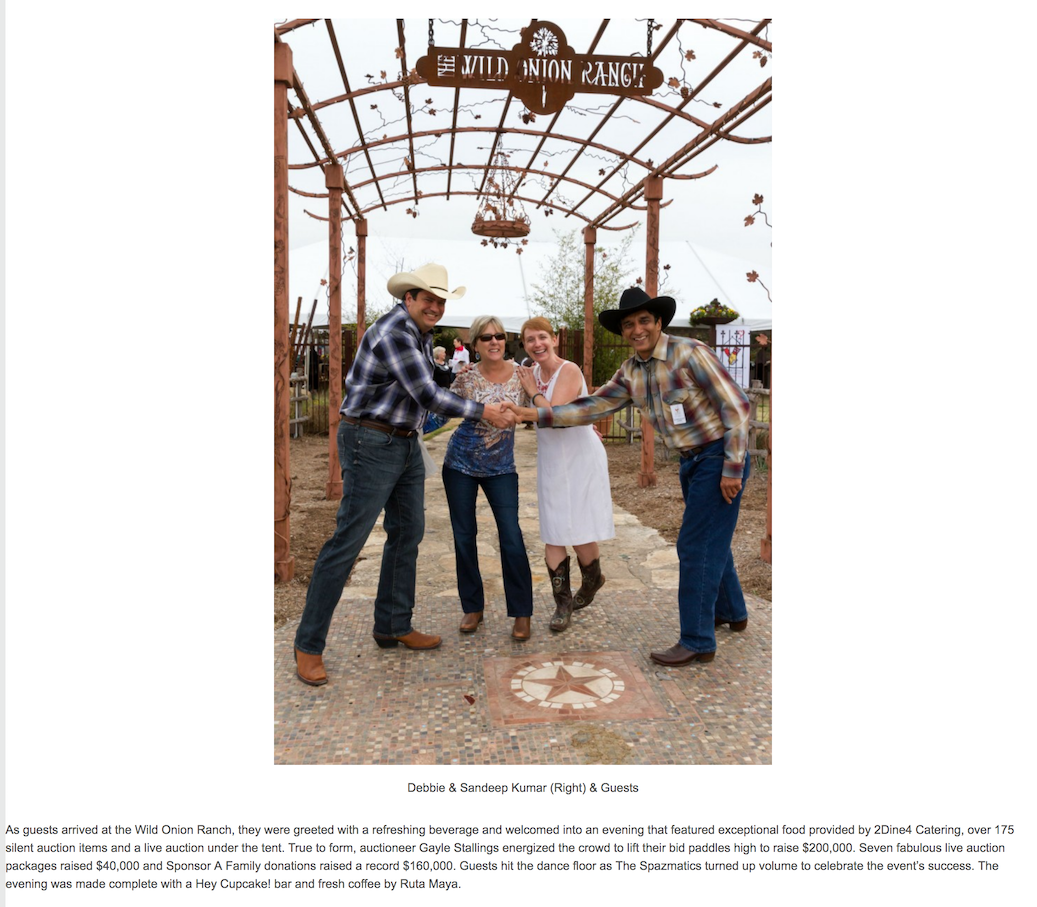 “For the first time, the team at FUNauctions, headed up by Gayle Stallings, did a hybrid live and silent auction, also called the Big Board.” By Rebekkah Adams, Ask Miss A, Charity Meets Style. February 27, 2014. 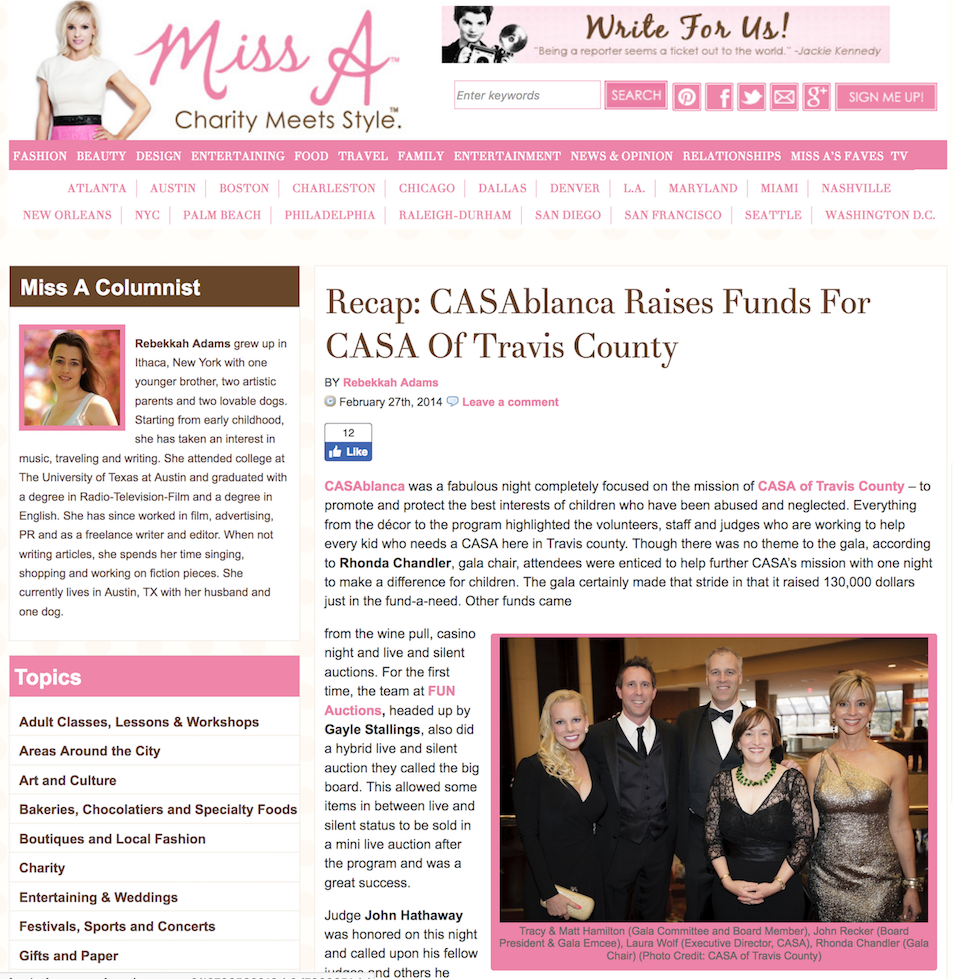 “From Super Woman to circus performers, Gayle Stallings works to put the ‘fun’ into fundraising.” February 2014 by Nancy Hull Rigdon, Auctioneer – the magazine of the National Association of Auctioneers. 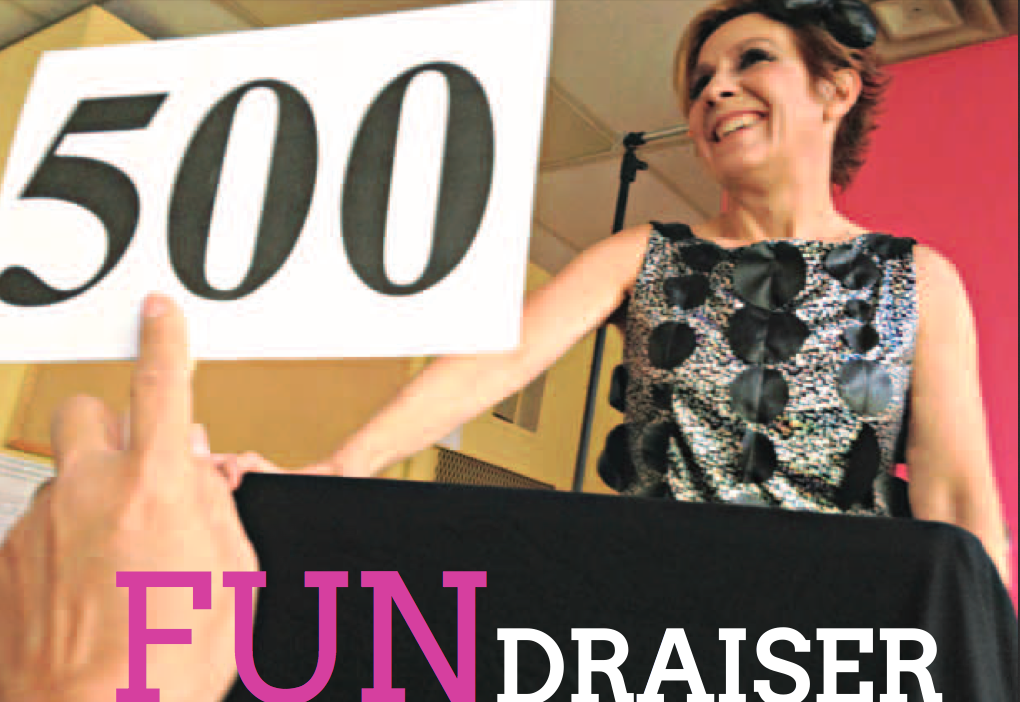 “Using her background in theater, radio and public speaking to make it more of a show than an auction, she gets bidders in the giving mood by recruiting everyone from circus performers to celebrities, preparing elaborate entrance routines and sporting colorful costumes on her tiny 4-foot-11 frame.” By Rachel Thompson for Austin Monthly Magazine. December 2013. 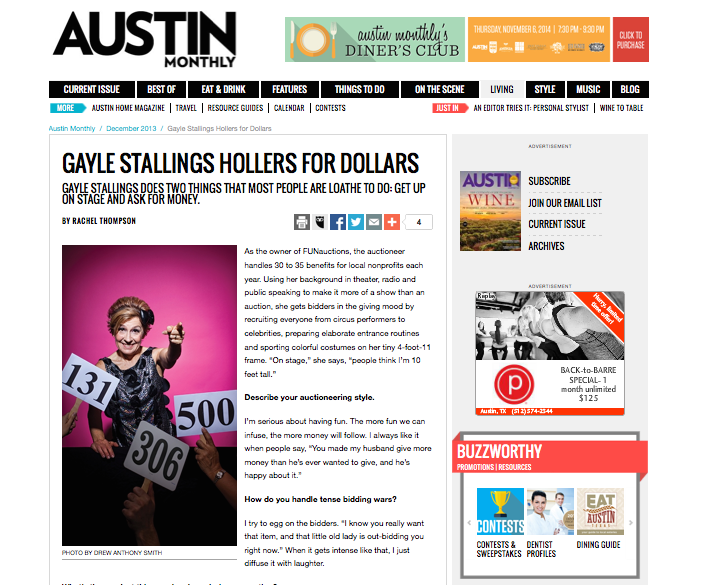 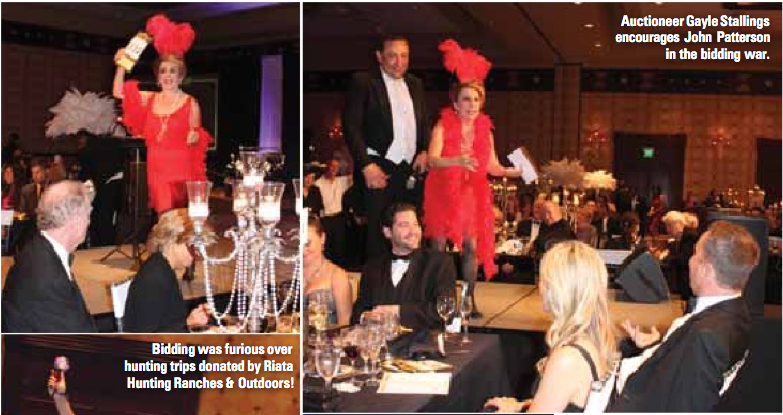 Originally posted on December 16, 2014 via Storify.

For additional FUNauctions in the news visit our Press page.