Wow, what a FUN night at Saturday’s 24th Annual Bandana Ball presented by the Ronald McDonald House Charities of Austin and Central Texas. Jan Gunter’s blog below shows what an exciting night it was and how much we exceeded our fundraising goal!
– Gayle Stallings

Most Amazing Bandana Ball Success Ever!
Reprinted by permission from Ronald McDonald House Charities of Austin and Central Texas.

Originally posted on March 25, 2013
by rmhcaustin
by Jan Gunter 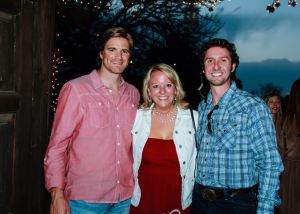 We’ve done this 24 times – this Bandana Ball – and I’ve been around for the last seven of them, but I am here to tell you this morning that we outdid ourselves on Saturday night. And when I say “we” that includes a whole lot of people starting with Kim and Tom Hibler who chaired this year’s event, and Kim’s challenge last year that we could raise $500,000. That, my friends, was a big challenge. Half a million dollars. The most we’d every raised before was last year at $412,000 – and that was no small accomplishment.

Kim, of Dell fame, set the bar high, and the staff, committee and board embraced the challenge. Then our development department, led by Ann Jerome and Missy Strittmatter, went to work with the committee a year ago to make it happen.

What an AMAZING night at The Wild Onion! Bandana Ball 2013 was a super success and I wanted to make sure that each of you knew how appreciative we are for your leadership and support each step of the way. The Committee and Staff worked really hard to live up to our fearless leader, Kim Hibler’s, big audacious goal of $500K and I am THRILLED with all of the hard work, determination, stewardship and planning that went into what was nearly a flawless event.

All of the work has paid off and RMHC-Austin has a lot of new partners and some very inspired longtime ones! The night was electric and the numbers are beyond belief – we’ll keep tallying this week but right now we know that we raised more than $550,000 (and, that’s conservative I think!) – I really can’t think of new adjectives to describe how awesome this year’s Bandana Ball really was on many levels.  –Ann

We could never say enough thanks to the Edgerton family for their generosity in sharing their home, The Wild Onion Ranch, with us for this amazing event. This photo of the entrance and the check-in table gives you an idea of the beauty and mood of this spectacular property.

They not only make this beautiful venue available to us, but they are part of the “we” involved in planning this event each year from the beginning. This year they made the centerpieces and built the darling Ronald McDonald House, complete with real longhorns.

That “we” included our amazing auctioneer, Gayle Stallings, who paused to have her picture made with J’Marcus Webb, Chicago Bears offensive tackle. J’Marcus was part of a Chicago Bears auction package that sold for $3,500, and I’m sure a lot of folks had their photo made with him throughout the evening. I hear he posed in the Photobooth with a twirly-gig hat on. Can’t wait to see that photo!

Ann Jerome posted this cute photo on her Instagram with our guest of honor, Brooke Hester, who has stayed at our Ronald McDonald House several times when she has been in Austin for treatments. Brooke is holding the Ronald McDonald doll that Ann had just given her. Brooke and her family are part of the “we” that made our event an amazing success on Saturday, and Brooke and J’Marcus were definitely the stars of the night!

You can see the video of Brooke that we shared on Saturday night at the Ball, and you can follow her progress on her Caring Bridge page as she continues to valiantly fight her battle.

Our media friends were there, including The Austinot, Michael Barnes and many others:

Watch for stories to follow from these writers and more.

Next year’s ball will be our 25th, and we already have the date: March 22, 2014. Save the Date, and we’ll see you out at the Wild Onion Ranch with your cowboy boots on!

Were you part of the “we” that made Bandana Ball 2013 an over-the-top success either by being there or by being part of the planning and preparation?

How many Bandana Balls have you attended?

Read Gayle’s Blog for insights and resources on many FUNauctions fundraising events.